Ava Sambora has landed her first film role, securing her spot as an official Hollywood princess. 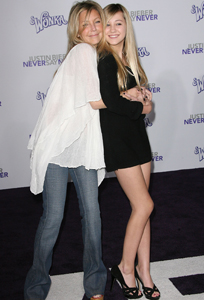 The daughter of Heather Locklear and Richie Sambora is ready to make a name for herself. After appearing on the runway for the first time last year, the 13-year-old is now branching out into film — and her first foray will be nothing to sneeze at.

Ava Sambora has landed a part in a new Judd Apatow comedy, and while it’s just a small role it is sure to get the young beauty noticed.

Sambora will play the part of best friend to a character played by Maude Apatow, who in turn will play the daughter of Paul Rudd and Leslie Mann.

Little is known about the movie, but others in the cast include Jason Segel, Charlyne Yi and Iris Apatow.

Judd Apatow is the comedic genius behind Bridesmaids, Get Him to the Greek, Talladega Nights, The 40 Year Old Virgin and Anchorman.

The unnamed film is tentatively scheduled for a June 2012 release.