A new petition is calling for PBS’ Bert & Ernie to make their rumored gay romance official. The Sesame Street roomies have long been claimed by the LBGT community and now, activists are calling for the Muppet pals to come out of the closet to support kids, while counteracting bullying. PBS and Jimmy Kimmel respond.

Forget Kim Kardashian’s wedding on E!: A very vocal crew is more interested in seeing a very different kind of wedding on PBS’s Sesame Street, and they’ve started a petition to make it happen. 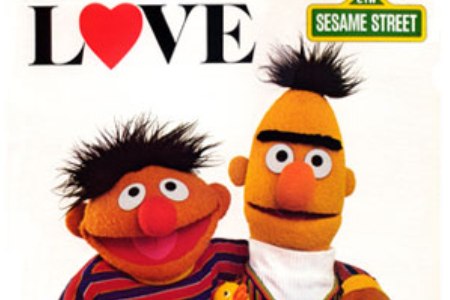 Bert & Ernie have been connected via ampersand for decades and over the years, the roomies, who are known to take baths together, have faced much tittering over whether or not they’re a closeted gay couple. There was even a 2002 short film, Ernest & Bertram, that told the tale of Bert and Ernie being outted by Variety magazine.

Now, the LBGT community is asking Sesame Street to use these BFFs as a learning tool.

“In this horrific age of LGBT kids taking their own lives, they need to know that they ARE BEAUTIFUL and their lives are worth living,” reads the Let Bert & Ernie Get Married on Sesame Street petition. “Aside from those that are committing suicide, the bullies that facilitate these tragedies need to learn that homophobia is NOT okay. They need to know that acceptance of their fellow human beings would indeed plant a seed of peace that will reverberate throughout the world. We are not asking that Sesame Street do anything crude or disrespectful by allowing Bert & Ernie to marry. It can be done in a tasteful way. Let us teach tolerance of those that are different. Let Sesame Street and PBS Kids be a big part in saving many worthy lives.”

At press time, the petition had over 5000 signatures, but Sesame Workshop has already put the kibosh on any nuptials.

“Bert and Ernie are best friends. They were created to teach preschoolers that people can be good friends with those who are very different from themselves,” reads the Sesame Workshop Statement on Bert and Ernie Petitions on Facebook. “Even though they are identified as male characters and possess many human traits and characteristics (as most Sesame Street Muppets do), they remain puppets, and do not have a sexual orientation.”

Jimmy Kimmel gets on high horse over Bert & Ernie petition

One reason the Bert & Ernie gay marriage petition is making news today is that Jimmy Kimmel spoke out about about it on Jimmy Kimmel Live. It takes awhile for him to get on his horse, but once he gets there, he chimes in on the controversial campaign.

What do you think: Should Bert and Ernie tie the knot on Sesame Street?