Conan O’Brien addressed the cancelation of Lopez Tonight and thanks George Lopez for the sacrifice that led to the end of his show. 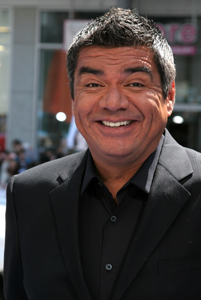 If there’s one guy who knows what it’s like to have his show unceremoniously axed, it’s Conan O’Brien. Now Coco is thanking George Lopez for a similar sacrifice after Lopez Tonight was canceled.

In a situation that was strangely similar to the Conan O’Brien Tonight Show fiasco, Lopez Tonight moved back an hour from its original 11 PM time slot to make room for Conan when he moved to TBS. As a result, Lopez lost a solid 40 percent of his audience.

“Had it not been for George being so incredibly supportive of me, I would not have come to TBS and we would not be doing this show right now,” O’Brien said. “I owe that man a lot and frankly, it makes me very sad that TBS and George could not work this out.”

“We understand, believe me, how hard this is for all of you, and we wish you all the best.”

George Lopez blames the cancelation on his race, which we think/hope is a joke.