George Lopez says his show was canceled because he’s Latino and says the cable format just doesn’t work for his kind of show. 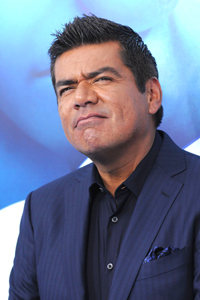 George Lopez is struggling with the news that Lopez Tonight was canceled and made some very pointed — and racially charged — jokes about it to his audience last night.

“In case you haven’t heard the news, TBS has decided not to renew Lopez Tonight and tomorrow will be our last night,” Lopez said to a jeering audience. “The unemployment rate is high, and for Latinos, it just got a little higher!”

Don’t cry for the comedian, though — he already has big plans. In addition to the second Smurfs movie, he’ll be touring with the legendary Carlos Santana — and he jokes he’ll pick up a shady habit.

“Like every TV star before me, I’m gonna find some crack,” Lopez joked. “I’m gonna get on the pipe! Lose that unwanted 110 pounds I wanted to lose. But I’m taking it good, I’m straight, believe me. I’m fine — my goddesses are a wreck … they left me!”