When Roseanne Barr wants to make a comeback, she makes sure everyone knows about it! Not only is she working on the docu-series Roseanne’s Nuts for Lifetime, but she’s got a brand new comeback sitcom in the works called Downwardly Mobile.

Roseanne Barr is a busy lady. She recently announced on The Tonight Show, that she was running for President. She’s currently working on a docu-series for Lifetime called Roseanne’s Nuts where she runs a 40-acre macadamia nut farm in Hawaii. And now she’s got a new sitcom in the works. That’s quite a comeback for someone who’s spent most of the last decade out of the spotlight. 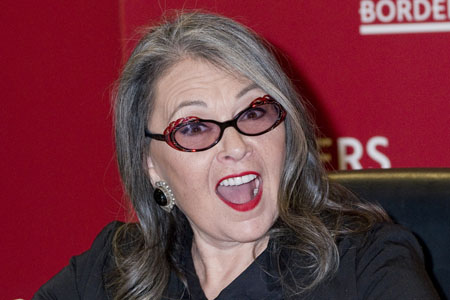 Roseanne Barr is Running For President: Everyone Gets Nuts

The Hollywood Reporter reports that the new series for 20th Century Fox Television will be called Downwardly Mobile and will be a star vehicle for Barr. Because clearly, no one knows who she is. Barr will be working with long time boyfriend Johnny Argent and is looking to target the same audience as her sitcom Roseanne. From the title, it sounds like a subject that is right on the money (excuse the expression) for most of the country.

This will be Barr’s first sitcom since Roseanne ended it’s nine season run in 1997. So what do you guys think? Do you want to see Roseanne Barr back in the sitcom world? Have you missed her all these years? And what happens if she actually wins her bid for President? (Just kidding.)