Gavin DeGraw is recovering from a vicious beating in New York, but the singer will be back on tour by the end of the month. 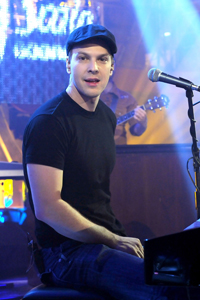 A rep for Gavin DeGraw said the I Don’t Wanna Be singer has been released from the hospital, but needs “additional time to recover” before he hits the road again.

That time is coming sooner rather than later, though, and despite rumors he would be back on stage as soon as this weekend his rep says he will return to the Maroon 5 tour by August 24 in Columbia, Maryland.

The singer had a message for his fans on Twitter. “Hi my friends. Honestly, I don’t remember much,” he wrote. “I only know I can recover from here. Thank u all for your genuine concern. I love u guys.”

Gavin DeGraw was attacked outside of a bar he owns with his brother in New York City, then hit by a car as he tried to stumble away. He suffered a concussion and broken nose in the assault. Police are investigating.