Bruno Mars is decorated with some MTV Video Music Awards nominations and it has just been revealed he will perform at the August 28 show! 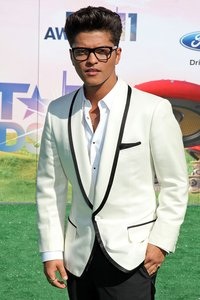 Bruno Mars is up for Video of the Year for Grenade and Best Choreography for The Lazy Song, but who cares about that! We want to see him perform on the VMA stage.

So, what does Bruno Mars think of the whole VMA experience?

“I grew up watching VMAs. I know every performance,” he recently told MTV News.

Mars added, “Ever since I was a kid, I’ve been watching MTV VMAs, and when we got the phone call saying that my video was up for Video of the Year, that’s the big-boy award.”

Video of the Year isn’t the one the singer is really psyched about, though.”You know what I’m excited for? As much as I put blood, sweat and tears into Grenade, I’m excited for The Lazy Song, Best Choreography,” he said.

Bruno Mars added, “That is amazing … and I think that would be the coolest thing ever if I went home and saw a Moonman that said, ‘Best Choreography, Bruno Mars, The Lazy Song.”‘

Other acts expected to perform during the August 28 MTV Video Music Awards include LIl Wayne, Adele and Chris Brown.

Who are you rooting for? Tell us, we want to know!