America’s Got Talent delivered the results from Tuesday night’s YouTube round and we have to say — we’re getting good at calling those who are going to advance. Read on for the details.

The YouTube round of America’s Got Talent is unpredictable, but we’ve gotten really good at figuring out who’s going to move on over the past few weeks — and we’ve done it again. 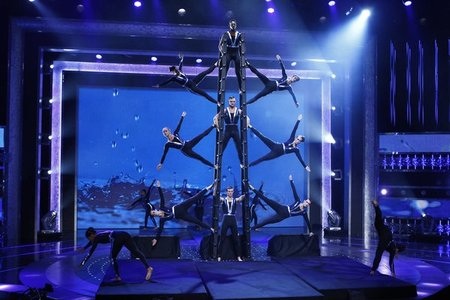 The first act to advance out of the 12 YouTube hopefuls was the fearless act known as Gymkana. Their ladder acrobatics and daring moves made us choose them for our highlights section, and it turns out America loved them too.

The next of the YouTube acts to make it into the semifinals was Matt Wilhelm. Wilhelm had received the most YouTube votes of all 12 acts gunning for a spot, and his use of bike tricks and flashy moves took the average stunt to a whole new level.

We went absolutely nuts for Kevin Colis and his take on Bruno Mars’ Lazy Song. We described him as a cross between Mars and Corbin Bleu in the looks department and we’re happy America saw what we did — talent! He sailed into the semifinals and will give the rest of the singers “a run for their money,” according to Howie Mandel.

What did you think of America’s Got Talent’s YouTube Round?