Lindsay Lohan was caught on tape with a plastic baggie full of rocks. Was she buying drugs? 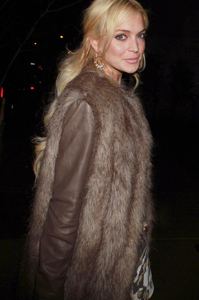 Lindsay Lohan was being followed by photographers for X17 in Venice, California when they saw the star buying a baggie full of rocks from some dude on the street.

The site strongly implied Lohan was buying drugs — and Lindsay’s rep is furious about it.

Steve Konig says the site is “Knowingly and consciously making inferences about Lindsay that are completely untrue, and creating a fictitious story to get more people to visit their site.

“We were not given a chance to comment on this story before it went up, and no effort was made to gather the facts about what actually occurred.

“When I addressed this with the agency, they told me ‘we’re not the New York Times.’ They have made a horrific mistake; the worst part is, they know it but don’t care.”

If Lindsay actually was buying that quantity of drugs, it would certainly be a violation of her probation — not to mention a felony — and she could end up back in the clink.

Lindsay Lohan stumbles through her first night of freedom