It is the movie of the year that is on the tip of everyone’s tongue and on every moviegoer’s must-see list. The Help is a fantastic story about a young writer who exposes the secrets of southern women and their domestic help, but it is author Kathryn Stockett that is the keeper of all the secrets. You won’t believe the back story of friendship and support which helped this amazing novel be made into a movie! 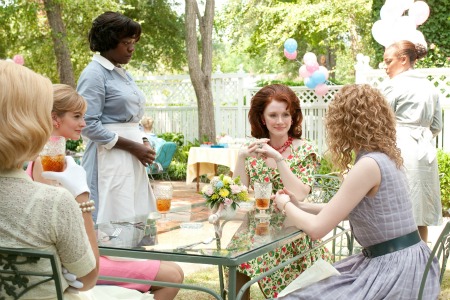 Ms. Stockett and her childhood friend Tate Taylor would cheer each other on throughout their lives as each struggled to pursue their dream. They checked in with each other for assistance, they reviewed each other’s work carefully. They held each other up when The Help was rejected by 60 different publishers and Taylor’s Hollywood directing career didn’t go exactly as planned. But the one thing they knew was when one made it in the business, the other would be right alongside them.

Stockett revealed in an interivew with The Wall Street Journal how their friendship was tested time and again in the making of this epic film.

“Tate would call me every couple of weeks with another draft or piece and I would look at it. I would not give my two cents. I really didn’t want to interrupt that process. It was crucial for me to hand it over to Tate and let him write his story.”

She continued, “I had so many people telling me, ‘Look, you cannot option this to Tate. He doesn’t have enough film experience.’ Tate was asking me for the rights and I’m pushing him back because of all these voices. I said no and everything went silent betwen Tate and me for two weeks. Tate called me, and it was a last ditch effort. I told him who else was asking for the rights, other filmmakers who had a lot of punch behind their names. Tate said, ‘Look, this is how many books this person has optioned and they’re sitting on the shelves and don’t get made into movies. It will either not get made or be really bad because they’re not from Mississippi.’ I realized, oh my gosh, Tate’s got to make this movie.”

The Help opens Wednesday and stars Emma Stone, Viola Davis, Bryce Dallas Howard, Allison Janney and Octavia Spencer. It tells the story of a young society woman who goes away to college and returns with the dream of becoming a writer. Her insider story of the life of the black women who tend to the most wealthy white families in town sets her small town in Mississipi on fire during the most tumultuous time for race differences, the 1960s.