In a completely surprising move — not! — Kim Kardashian and her basketball beau Kris Humphries will share their special day with the world in a two-part special on E! 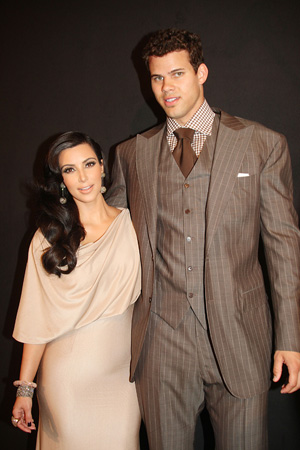 If a Kardashian fell in the woods without a camera to catch the action, would it make a sound? We’ll never know, because the Kardashian clan can’t seem to do anything without the cameras on hand. This time, they’re sharing Kim‘s wedding with the world in the two-part special Kim’s Fairytale Wedding: A Kardashian Event, airing in October.

The 30-year-old will wed Humphries in a ceremony rumored to be scheduled for August 20, 2011, at a locale in Montecito, California.

“There`s no location yet, but Kim is already invited at least 1,000, and the list is getting longer,” says an unsourced quote that’s floating around the net. “The original idea was to have a wedding on each coast, but she now wants one huge wedding. She’ll probably reveal where the ceremony is. She hopes to make a huge entrance. She`s having guests sign confidentiality agreements.”

If you’re not one of the lucky 1000 signing the confidentiality agreement, you can still catch all the glitz, glamour and romance of Kim and Humphries’ wedding extravaganza, thanks to E!.

The two-part special promises to follow the bride, groom and entire Kardashian clan every step of the way, from the lavish wedding planning to the fabulous parties to the highly anticipated big day when Kim and Kris say “I do.”