Here’s a new look at the super Jessica Alba in the upcoming Spy Kids: All the Time in the World. 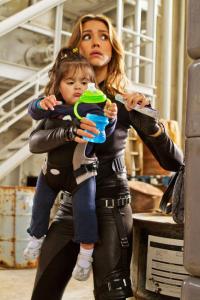 The gorgeous Jessica Alba has always been super in superhero roles, from TV’s Dark Angel to the movies’ Fantastic Four.

Now she’s a super spy mom — and an expecting super spy mom at that — in the new family comedy Spy Kids: All the Time in the World. Alba plays Melissa, wife of Joel McHale (NBC’s Community) and the stepmom to his two kids, who gets pulled back into the spy game at a most inopportune moment.

“I’m having a contraction — all the more reason to get the job done now!” said Alba as she dives into adventure as her character is pregnant.

The demands on spies these days!

Alba battles bad guy Jeremy Piven and Spy Kids vets Carmen (Alexa Vega) and Juni Cortez (Daryl Sabara) are along for the ride. Also, Antonio Banderas and Danny Trejo check in and Ricky Gervais is the voice of the family dog. “I have to go on an important mission — I mean errand!” says Alba in Spy Kids: All the Time in the World.

The Robert Rodriguez-directed Spy Kids: All the Time in the World comes out Friday, Aug. 19. Check out the new video below and check back here on the 19th for SheKnows one-on-one video interviews with the stars Alba,  Piven, and McHale.

SPY KIDS: ALL THE TIME IN THE WORLD VIDEO