Jennifer Love Hewitt won’t be appearing on The Bachelorette, but she sure is acting like one in real life! Find out which former Bachelorette contestant J-Love has been dating!

Has Jennifer Love Hewitt found love with one of Bachelorette Ashley Hebert’s castoffs? It may be too early to tell, but the actress confessed her crush on 28-year-old winemaker Ben Flajnikon Twitter and has been pursuing him hard! 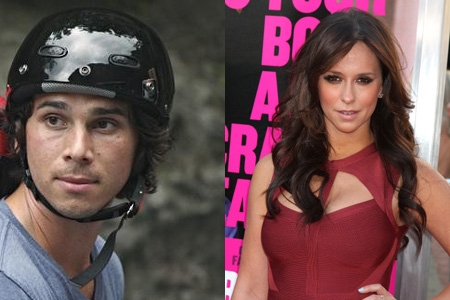 Although Flajnik lost out to JP Rosenbaum for Hebert’s final rose, he definitely gained a fan in the Ghost Whisperer actress.

“Omg! Ben f except my final rose !!! I love that ring. Neil lane u rock!! Happy for Ashley…. Gotta book a flight to Sonoma!” Hewitt tweeted the day after The Bachelorette finale on August 1st.

Four days later, Hewitt was spotted with Flajnik at the Lion’s Pub in San Franciso. The girl works fast!

Even though Flajnik arrived with San Francisco Giants star Cody Ross, he spend the evening with Hewitt, who was reportedly “loving the attention” by fans. Flajnik, however, was reportedly not “overly affectionate” to the actress. The couple reportedly left together — and, from the sound of it, Hewitt had a great first date!

“Morning lovelys! I got lost in the most amazing sat! Just when you think u can’t be surprised…. You are and it’s awesome!” she tweeted the next day.

Their relationship could be put on hold if Flajnik becomes the next Bachelor, as many believe will be the case.

Tell us: Do you think Jennifer Love Hewitt and Ben Flajnik make a cute couple?