Rock princess Frances Bean Cobain is debuting a very grown-up look in a photo shoot in honor of her 19th birthday. 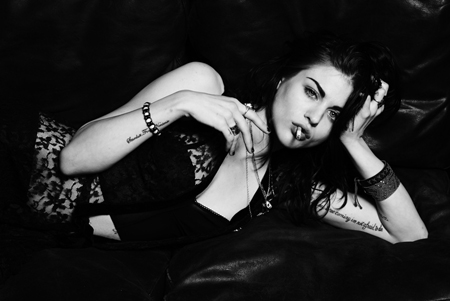 While those of us who were around at the height of the grunge era remember Frances Bean as just a babe in her troubled father’s arms, that tot has grown into a beautiful young woman — and she’s showing off her edgy look in a photo shoot by photographer Hedi Slimane.

The images show a striking girl with dark hair and her father’s startling eyes, covered in tattoos: One flower on her wrist is nearly identical to flowers her mother has on her arms, chest and back, while lyrics to the Jeff Buckley song Grace can be seen across her arms.

She looks jaded, disillusioned and Goth — and absolutely gorgeous. If we could just get her to drop the smokes…

Frances Bean and Courtney Love have been estranged since she was 17 amidst whispers of violence and drug use on her mother’s end.

See the complete set of photos on Hedi Slimane’s website.