The Help star Viola Davis has announced that she and her husband are planning on adopting a baby. 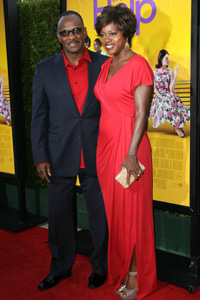 Viola Davis, who plays a Mississippi maid in the movie The Help, has announced that she and her husband Julius Tennon are adopting. Married since 2003, this will be the first child for the couple, however Tennon has two children from a previous relationship.

“We don’t have any children [together], but we’re about to adopt a baby,” Tennon said at The Help premiere.

The 45-year-old Tony Winner confirmed her husband’s statements, saying it will happen “domestically.”

“Yes, we’re about to adopt a baby,” she told reporters on the red carpet, looking gorgeous in an Escada gown accessorized with gold accents.

Davis, who was nominated for an Oscar three years ago for the movie Doubt, recently confessed she almost didn’t take the role in The Help, which is based on the bestselling novel by Kathryn Stockett and stars Emma Stone.

“I picked up the book and saw that this white woman wrote it and I went, ‘Ugh,'” she told Movieline. “My heart sank.”

She changed her mind once she read the material and was drawn into the role. “I just thought that the characters were so fleshed out. I did not see stereotypes. I saw maids, but I didn’t see stereotypes.”