Alec Baldwin has his eye on New York City politics and maybe even the mayor’s seat, but not today. First, he’s going to hit the books to prepare and finish up his gig at 30 Rock. Yes, we said finish up!

There has been speculation for some time that Alec Baldwin would step into the political arena and after the funnyman landed his fourth 30 Rock Emmy nomination last month, those rumors hit a high. Now, Baldwin is actually taking steps to get into the ring, which means his character Jack Donaghy will eventually leave Liz Lemon (Tina Fey) behind, according to The New York Times. 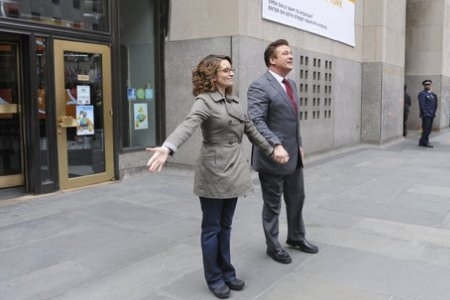 The story is that Baldwin won’t get into the 2013 mayoral election because of his obligations at 30 Rock and a desire to educate himself before taking a stand in politics. He does, however, plan on getting into a race eventually, be it for NYC mayor or loftier position. First, however, Baldwin plans to enroll in a Master’s program in politics and government and make a few other moves in preparation for a possible run.

“I am someone who is fully prepared for the fact that I could go into this and do it and completely have my ass kicked,” he told the Times. “I could throw a party and no one could come. And it would be this staggering lesson for me.”

The actor doesn’t believe “the almost bottomless container of video clips of me doing the most asinine things” will get in his way. He’s also confident he can get past his real life gaffs, “including the tape of me with my daughter,” he said, referring to that infamous voicemail where he called Ireland, his daughter with ex Kim Basinger, a “pig.”

For folks in the New York area, the politics may be the meat of this story, but for 30 Rock fans, it’s all about the show and whether NBC’s madcap sitcom can survive life after Donaghy.

Baldwin is booked as the yin to Liz Lemon’s yang on 30 Rock through April 2012, and then will “appear occasionally in future episodes,” according to the story. That means if 30 Rock returns for fall 2012, we won’t see as much of Jack. Then, it fall 2013, he might not show up at all.

As any fan knows, frazzled head writer Liz Lemon might not survive life without her mentor. The question is, can 30 Rock‘s head writer and star Tina Fey make it work?

Do you think 30 Rock and Liz Lemon will make the grade without Baldwin’s Donaghy?