A shape-shifting Twilight actor has been arrested on drug charges. Which werewolf is in trouble today? 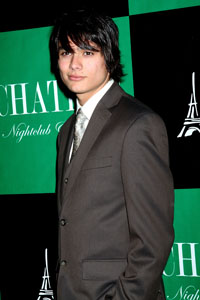 No, hunky Taylor Lautner is not in the pokey — he’s too pretty for jail. Kiowa Gordon, the actor who plays shape-shifting werewolf Embry Call in the Twilight movies, was arrested in Arizona early Monday morning on drug charges.

Police in Tempe, Arizona, pulled Gordon over in a routine traffic stop around 6 a.m. and discovered the actor had an open warrant. Turns out the 21-year-old has some loose ends to tie up from a 2010 arrest on drug paraphernalia possession charges.

Gordon has been busted with a glass marijuana pipe, and was also charged with being in possession of alcohol while underage. He was caught with Four Loko, an alcoholic energy drink that has since been banned in several states.

The actor was taken into custody and booked in the Maricopa County Jail, held on a total $1,500 bond.

Gordon got his big break by sheer luck — he attended the same Mormon church as Twilight author Stephenie Meyer, who suggested him for the role. He is a member of the Hualapai tribe of Northern Arizona.