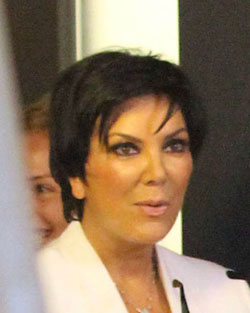 Kris Jenner got a lot of flack a few weeks ago for getting a facelift in preparation for daughter Kim Kardashian’s wedding to Kris Humphries. However, Jenner revealed that she actually went in to get some new boobies!

“I went in actually to get my boobs done. I thought I’ll do this and completely changed gears at the last minute. My surgeon is Garth Fisher; he’s amazing, a good friend and always tells it like it is. When I went in he said ‘You don’t need to do that,'” Jenner told EXTRA.

She opted for the facelift instead — and insists that you can’t really tell a difference. “I mean it pretty much looks the same. I didn’t have anything done to my eyes, nose or mouth. Nobody notices the difference. I’m waiting for somebody to say something.”

Uh, Kris? We’re saying something: You didn’t need to get a facelift for the wedding. However, it’s par for the course for someone who prides herself on being involved in everything with her kids’ lives.

“I’m a momzilla,” she laughed.

“I don’t know. I am just the mother of the bride. I can’t say who is coming and who is not. I would have to kill you if I gave you that information,” she said.

No worries, we’re sure to hear all about it come Aug. 20.

Do you think Kris Jenner is too controlling?