As if gorgeous Kendall Jenner didn’t have enough guys looking to date her, enter Justin Bieber. He wants to hook KJ up with his music producer buddy. Justin, who famously flirted with Kendall’s big sis Kim last year, is playing a new role in his young life, matchmaker, and the endorsement is blessed by girlfriend Selena Gomez. 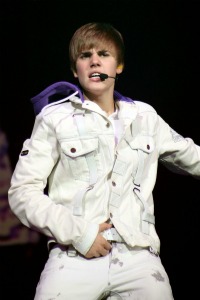 Justin Bieber has worn a lot of hats in his young life: singer, songwriter, actor, and teen heartthrob. But he now proudly wears an unlikely one — matchmaker. The object of his intention? Kendall Jenner, with whom he wants to hook up his 15-year-old producer buddy. Last time The Beebs was in the news, it was for yet another underage tattoo. This time, it’s for love.

Justin Bieber and dad have Jesus on their side>>

Having such power at only 17 years old, must be a heady experience, especially when you can hook people up just by tweeting them. Hey, the guy’s got it all, a superstar girlfriend, money to burn and talent to spare. Why can’t he have a little fun as well?

Who knew Justin Bieber was a science nerd?>>

It seems Justin sent out a tweet to Kendall Jenner to date his pal Julian Swirsky by saying, “Hey Kendall Jenner, you should let my boy take you out on a date.”

It took Kendall some time to respond (she is busy taping the ever-popular show, Keeping Up With The Kardashians after all!), but when she did, she tweeted back, “Only if you and @selenagomez join!:)”

So it looks like if Justin wants Kendall to hook up with his friend, he and Selena better come along for the ride. Kendall isn’t a fool. Any double date with the reigning king and queen of teendom is sure to get some serious press, and on the advice of Mama Kris Kardashian, all press is good press.

This isn’t the first time Justin has hooked himself up with a Kardashian girl. Last year, Justin and Kim Kardashian were spotted together shooting some pics on the beach, lending themselves to an Internet backlash of negative publicity and some death threats for Kim as well.

After that incident, it was big sister Kim who tried to hook up Justin and Kendall. She took to her blog to suggest that JBeeb date KJenn. Said Kim, “He seems like a really driven and focused kid, just like Kendall and they would make an adorable couple. What do you say Kendall, should we make this happen?”