Jessie and the Toy Boys singer tells SheKnows about her amazing summer on tour with Britney Spears and where she’s headed next. 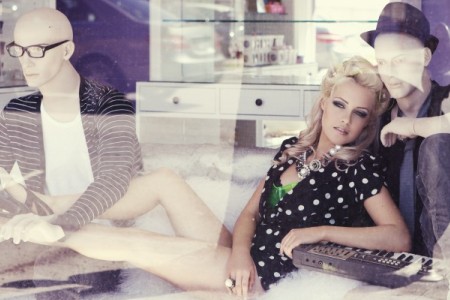 For 22-year-old Jessie Malakouti, going on tour with one of her childhood idols was pretty much the pinnacle of cool.

“This has been the best summer of my life,” the singer of Jessie and the Toy Boys told SheKnows.

Up-and-comer Jessie fulfilled her childhood wish when she opened up for Britney Spears and Nikki Minaj this summer on the Femme Fatale tour.

“I am a major fan,” said Jessie. “I love Britney. I actually did my 5th grade talent show to ‘Baby One More Time.’ I grew up and had her posters all over and I would rewind her music videos and try to learn the routine. It was very surreal to be opening up for her. “

The blonde bombshell and her “band” of mannequins were already making a name for themselves when she landed the coveted gig.

“We had been playing a bunch of club shows all around the country,” said Jessie. “I heard that Britney was looking for an act and I just put all my energy and focus into landing the spot. I really believe in willing things into your life and I really think that’s what happened.”

So what was it like hanging out with two of the biggest names in the biz?

“They are very sweet girls so it was cool to become friends with them,” Jessie Malakouti told SheKnows. “I would go on stage and perform and then right after that I was able to watch Nikki and Britney’s set every night. That was awesome because I went from playing in front of fans to being a fan every night in the audience.”

Between performances, most of the time was spent on the tour bus.

“It was very fast paced,” Jessie told SheKnows. “You go to bed in one city and wake up in another. Everybody sleeps in these like coffin-bunks and they have curtains that close you in. You’re all like sleeping on top of each other. You have to climb on each other’s bunks to get into your bunk. It’s like a college dorm on wheels.”

Jessie Malakouti wrapped up her leg of the tour this week, but her work isn’t over. She’s taking off for the Identity Festival and will be on the road through September.

Guess she better get used to those coffin-bunks!

For more, check out the Jessie and the Toy Boys website.

Image courtesy of Jessie and the Boy Toys