We love the YouTube round of America’s Got Talent — especially when a dog pees on Piers Morgan! Read on for the details.

We’re so close to the semifinals of America’s Got Talent we can taste it! However, there was still the YouTube round to sit through on Tuesday — and boy was it worth it! 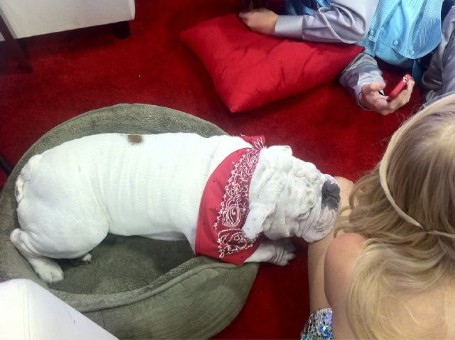 There were a few reasons we went nuts over the YouTube talent on Tuesday’s America’s Got Talent! The first was Gabe Rocks. Gabe Rocks was an amazing Bulldog that skateboards, buzzes the buzzer like the AGT judges and pees on Piers Morgan. Wait, did we just say that? Check out the video to see what we mean.

Another talent that we were excited over was Kevin Colis. This humble singer performed Bruno Mars’ Lazy Song so well we thought we were listening to Bruno! Well, not completely, but you get the point. When you see the video you have to tell us — is he a mix between Bruno Mars and Corbin Bleu looks-wise?

Gymkana could be the one to watch in the competition. There’s a lot of danger teams with acrobatic elements, but anyone that climbs ladders and uses them as their personal playground has stepped it up a notch. See for yourself.

We’re on the fence with this next act and despite our normal ‘choose four rule,’ we’re throwing them in anyway. They are West Springfield Dance Team and they are scary. The use contacts and dark costumes to magnify their intense dance moves. Remember when My Chemical Romance released Black Parade? Yeah, it’s kind of like that!

Matt Wilhelm got the most votes on YouTube of the talent and we can see why. His bike tricks are daring and unique on a level that combines elements like glow-in-the-dark effects with his own flavor.

Who do you thinks is moving on Wednesday on America’s Got Talent?

read on for more America’s got talent

Check out Maroon 5 on America’s Got Talent