Is Lil Wayne gay? One website seems to think so. 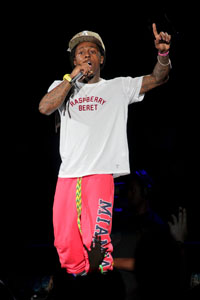 So, now that we know Lil Wayne didn’t die in a car accident, Media Take Out is trying hard to keep Weezy in the news. How? By questioning his sexuality, of course!

The gossip website posted a few photos of the How to Love rapper a few days ago with some hints that the rapper likes males more than he likes females.

“Hip-hop has gone through many phases — the conscious era, the gangsta rap era, the bling-bling era…” they wrote over a photo of the rapper. “Now we’re in a new era…”

“We’ve been wondering for a while what the new ERA of hip hop would be… well if WEEZY and ’em had there (sic) way.. this is it…the gay era!”

The writers are basing their opinion on the photos of Lil Wayne that feature him in a camouflage shirt, jhorts with a song verse printed on them and some colorful accessories. Uh, that makes him gay? OK.

It’s not the first time Lil Wayne has been accused of being gay. Rumors emerged a few years ago after Wayne and his mentor, Birdman, were caught in a mouth-on-mouth kiss.

“If anybody think I’m gay, come test me. I light you up. I probably smash your girl…twice! Her and her best friend.”

Yeah, we doubt Lil Wayne is gay. If anything, he looks at his mentor as a father figure. As for Media Take Out? We can’t trust a ‘news’ outlet that doesn’t know how to use spell-check.

Do you think Lil Wayne is gay?

Read on for more Lil Wayne