Ali Lohan, little sister of the increasingly infamous Lindsay Lohan, has signed on with a modeling agency. Is their father Michael Lohan worried his little girl will struggle with fame and success as well? Not even a little bit.

Ali Lohan has landed a modeling contract. While most parents would be thrilled for their child to find success they’d also be concerned for their 17-year-old to go off into the often wicked world of fame. Michael Lohan, father of both Ali and Lindsay Lohan, doesn’t see any reason to worry. 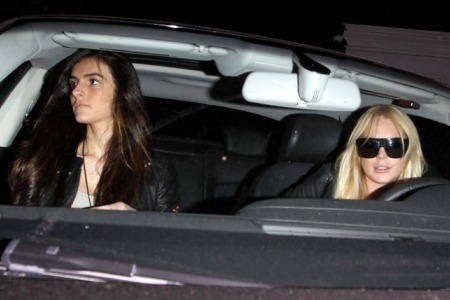 Word is out that Ali Lohan has signed on to model with NEXT Model Management. “In fashion, Ali will set herself apart as a bonefide icon,” Lexis Borges, the director of Next LA tells RadarOnline. “One that fashion fans will follow not because of her famous last name, but because of the beautiful images and fashion trends she is helping create.”

Speaking of his 17-year-old daughter’s new career Michael Lohan commented, “It’s been a long time coming, she’s so beautiful and I think she will do very well.”

But is Michael worried Ali Lohan, who spent much of the summer by sister Lindsay Lohan’s side, will struggle with fame and success as well? “She just had to find her niche,” he said. “I know she will be successful and won’t get caught up in the industry after all she’s learned from Lindsay.”

Attempts to reach Dina Lohan, mother of the girls and ex-wife of Michael, for comment have not been returned as of yet.

Are you surprised Michael Lohan can be so comfortable with Ali Lohan’s new modeling contract?