Tori Spelling says she would love to plan Shannen Doherty’s upcoming wedding. What are the chances that the 90210 frenemies will reunite? We aren’t holding our breath on this one! 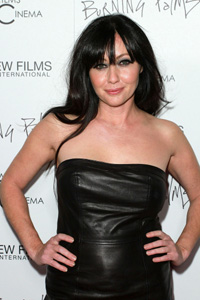 Tori Spelling and Shannen Doherty rose to fame together in the 1990s with 90210, but it was Spelling’s 2008 autobiography sTori Telling that turned these co-stars from friends to frenimies.

Tori wrote about the “fistfight” between Doherty and Jennie Garth, as well as slammed Doherty for being “arrogant and carefree.”

Doherty spoke out about the book and Tori’s account of the fight saying, “We never did. I think I would remember Jennie’s fist connecting with a part of my body or a part of my face. It just goes to show you how people will lie.”

Fast forward to 2011 and Tori has a reality show on Oxygen focused on her wedding planning services, called Tori & Dean: sToribook Weddings while Doherty is planning to marry photographer Kurt Iswarienko on-air in an untitled WE tv series next year.

When asked by ET Canada about Doherty’s upcoming wedding, Spelling quickly responded: “I’ll do the wedding!”

What type of wedding would she plan for her former friend? “People’s tastes change. I could probably comment on the wedding she’d want 20 years ago, but that wouldn’t make any sense,” Spelling says. “She has great taste, I know that.”

She also offered up her husband, Dean McDermott’s culinary services. “He’s in culinary school now. He’s always had an interest in being a chef.”

No word if Doherty plans on taking Spelling up on her offer, but we would love to see those two planning a wedding on live TV.