Gavin DeGraw is still reeling from the injuries he suffered early Monday morning. However, he’s already plotting his return to the stage — this week. 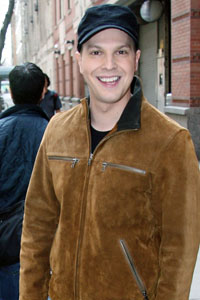 Gavin DeGraw is really, really, really dedicated to his music. That’s the only way we can reason why he’s planning on returning to the Maroon 5 and Train tour on Friday.

DeGraw, 34, was brutally attacked by a gang of thugs early Monday morning on Manhattan’s Lower East Side. He had just finished a night out with friends when the attack occurred.

“Gavin DeGraw is currently recovering and in stable condition… after he was attacked by a group of assailants. He suffers from a concussion, broken nose, black eyes, cuts, and bruises. The police are conducting an investigation of the attack,” his rep said in a statement on Tuesday morning. “Gavin and his family appreciate everyone’s concern at this time.”

Despite that, a rep for Live Nation told The Hollywood Reporter that DeGraw will take the stage Friday night at Jones Beach Theater. His future with the tour was questionable after the attack, but it looks like he’s going to push forward. We can’t help but think DeGraw will still be in serious pain from his broken nose and concussion. Will he even be able to sing?

The Chariot singer is known for his love of performing live, so maybe that’s why he’s so anxious to get back out there?

“I believe in the live show. To me, that’s the whole point of playing music is the live experience. I’m not a hip-hop artist or modern R&B artist or rap artist. A lot of them can put out a new record every six months because a lot of them don’t do a huge amount of touring. They’re more like studio artists,” DeGraw recently told Pure Songwriters.

We’re sure your fans would prefer you get well before venturing back on the road, Gavin. Don’t jeopardize your health and musical future for one concert!

Do you think Gavin DeGraw should go back on stage this week?