Angelina Jolie has been staying in a rented house in London with her six kids; however she has become fearful of her safety due to the London riots and will likely flee soon. 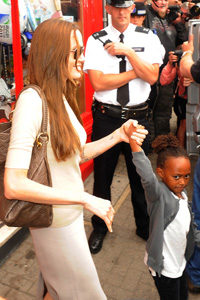 The London riots have caused looting, violent attacks and unrest, which has left Angelina Jolie fearful for her children’s safety. Jolie is staying in a rented house in the Richmond area of London that is close to a popular shopping area that could be a target for looters.

Jolie brought the kids to London to be close to Brad Pitt, as he is filming the zombie flick World War Z.

“Angelina is petrified because she is with the children,” a member of her security team tells Us Magazine. “It’s a matter of not feeling safe. She can’t believe this is happening in a place like the UK.”

The insider reveals that Angelina plans on leaving with her six kids, Maddox, 10; Pax, 7; Zahara, 6; Shiloh, 5; and 2-year-old twins, Vivienne and Knox.

“Security has been increased around the house. We have to be vigilant,” their security teams says. “The plan right now is to get out now — hopefully [Tuesday] evening, or [Wednesday] morning by the latest.”

Pitt must stay in the UK to finish filming his movie, however he is five hours away from the violence in Falmouth. “Brad is really worried. He’s pretty safe because he’s in Falmouth, but knowing Angie and the kids are in London is what’s making him worried. He has been calling the house regularly, to make sure they are OK and calm.”