Victoria Beckham is taking the concept of casual Fridays to a whole new level. The new mom reveals she often holds business meetings in her bikini!

Think wearing a sleeveless shirt to the office is pushing the limits of your office dress code? How about beach wear? Victoria Beckham says her favorite business suit is her bikini! 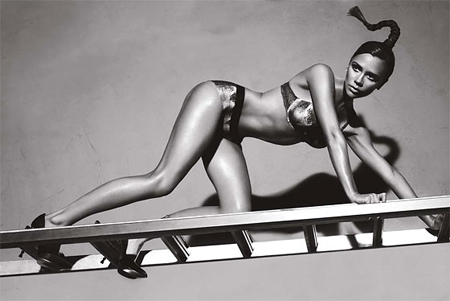 Granted, Beckham doesn’t wear it in person — just when she Skypes her London office from her LA home base.

“When I’m here in London, which is for about a week every month it’s really, really full-on,” Beckham told Elle Collections.

“Then, when I’m back in the U.S., I use Skype to talk with my team — usually wearing either a dressing gown or a bikini.”

Don’t try this at home, ladies and gentlemen.

Victoria Beckham hasn’t been spotted out in public since giving birth to her fourth child Harper Seven last month, but is expected to debut her post-baby body at New York Fashion Week in September.

Read on for more Victoria Beckham

Victoria Beckham: I want Harper to be like Kate Middleton