Christina Aguilera is reportedly considering having sworn enemy Eminem make an appearance on her next album. 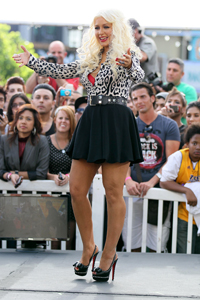 The Voice judge Christina Aguilera knows that after her last album and movie tanked, she needs to pull out all the stops to make a hit record — even if that means turning to her most bitter enemy.

Back in those heady, glorious days when TRL was on the air, Eminem ripped Christina Aguilera and fellow pop tart Britney Spears into tiny little pieces in his song The Real Slim Shady. Despite their rocky past, Aguilera is reportedly trying to let bygones be bygones and asking the rapper to add a little oomph to her next offering.

“Christina knows after her last album bombed that she would have to do something special for fans to be interested in her music again,” a source told M is for Music. “It’s a killer track and is bound to be a massive worldwide hit if released as a single, which is exactly what Christina is hoping for. She can’t wait to release the record and prove all her critics wrong.”

Now she just needs to work on that feud with Kelly Osbourne.

Watch the video that started the feud between Christina Aguilera & Eminem:

Christina Aguilera bares all for W