Kate Gosselin doesn’t know if Kate Plus 8 will continue — but she’s trying to line up a new man to keep her busy. 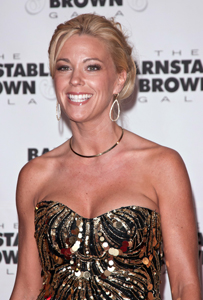 Kate Gosselin has changed dramatically since she first appeared on TLC with her brood of eight. A tummy tuck, strict workout routine, a divorce, and stylish new hairdo have turned the former frump into one hot mama.

Now Kate says that she’s ready to date again — and already had her eye on one lucky guy. She’s also talking about those rumors her show is being cancelled.

While filming an episode of Kate Plus 8 at Georgetown Cupcakes, the mom spotted a handsome stranger across the street and sent her trusty bodyguard Steve after him.

The good news: He had no idea who Kate is. The bad news: He has dietary restrictions, which are apparently a deal-breaker in Kate’s book.

Watch Kate Gosselin try to snare a man with her lusty cupcakes:

As for rumors that Kate Plus 8 is facing cancellation? It’s news to her, says Gosselin. She told Today show co-host Ann Curry, “There is a lot of talk about it, and nobody’s told me.”

“We’re happy to continue on and we will do so as long as people are watching. There’s been a lot of fans and supporters who have continued to watch us through good and through bad and I just have to take this opportunity to say thank you and we’ll still be on TV as long as you’re watching us,” Kate said.