Kim Kardashian made a pre-wedding visit to her father’s grave with fiancé Kris Humphries — an emotional private moment, except for the camera crew. 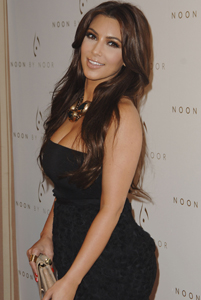 Kim Kardashian has found a new way to bring fans into every intimate moment of her life: Cameras were there when she and fiancé Kris Humphries visited the grave of her father.

In a move many are calling tasteless, Kardashian dragged along a huge crew for her televised wedding extravaganza as she and Humphries made public what should have been a deeply private visit.

While Kim very well may shed some tears in the version we see on television, paparazzi cameras caught the couple laughing and frolicking on the sacred grounds of the cemetery with Kim wearing a very short black micromini.

This shouldn’t be all that shocking, considering this is a family that doesn’t even get a bikini wax without a camera there, but still. A little respect, please.

Kim’s father Robert Kardashian was one of O.J. Simpson’s lawyers in his murder trial. The reality star caused controversy when she spoke out against the Casey Anthony verdict. He died in 2003 after a short battle with esophageal cancer.