Jenelle Evans is becoming all too familiar with the arrest, booking and mug shot process. The Teen Mom 2 star is in trouble with the law yet again — and is that a new boyfriend we spy? 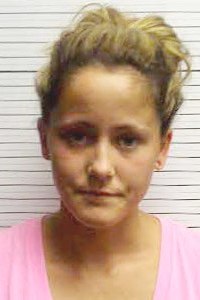 Teen Mom 2‘s Jenelle Evans is amassing a shameful collection of mug shots. The young mother of Jace has been arrested once again after leaving rehab just weeks ago.

While many have been quick to blame Jenelle’s troubles on boyfriend Kieffer, it looks like the pair may have split for good. (Check out a picture of Jenelle Evans snuggled up to a new man below!)

Jenelle Evans‘ mug shot, taken on Monday, shows the 19-year-old in hot water with the Brunswick County police for once again violating her parole. Reports state Jenelle tested positive for marijuana/opiates during a scheduled visit with her parole officer, leading to her arrest.

The Teen Mom 2 star was arrested and locked up in the Brunswick County Detention Center under a $10,000 bond, but was released late Monday evening. She is due in court Aug. 24 to face the judge on these latest charges.

It was just this past March that Jenelle Evans’ legal troubles became big news with a video-taped brawl hitting the Web. In April, the mother of son Jace was given 12 months of probation and community service after copping a plea to an unrelated drug case.

The good news it looks like boyfriend Kieffer, no stranger to the law himself, may be out of the picture. On Aug. 7 Jenelle Evans tweeted this message with the following picture: “Bye bye quieffer, hello gorgeous :)” 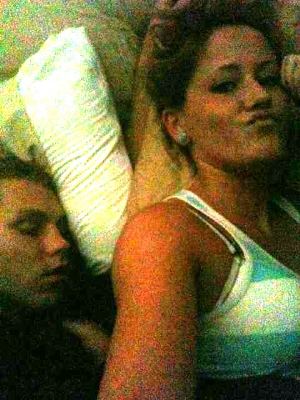 Is it a bad relationship omen that the pic of ‘Mr. Gorgeous’ showed up just hours before Teen Mom Jenelle Evans’ latest arrest?