Charlie Sheen says he is rooting for Ashton Kutcher to succeed on Two and a Half Men — and yes, he will be watching his own funeral. 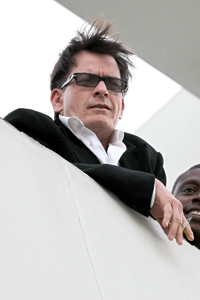 Charlie Sheen has become much more reasonable as of late. The tiger-blood-guzzling warlock has put down the haterade and is now actually praising his Two and a Half Men replacement, Ashton Kutcher.

“Ashton is going to kill it,” Sheen told paparazzi in Los Angeles Monday.

“I’m actually rooting hard for him, that worm is turning. It should be exciting,” he said.

Don’t think for a minute, though, that Sheen has any insider information on what the season premiere holds. “I’ve got nothing I can reveal because they wouldn’t even give me a script!” he said.

“They didn’t trust me, it will be a nice surprise, I think Ashton is going to kill it.

“It’ll be nice to know that they get some carry-over ratings from people being sort of curious about what happened to their guy,” he added.

“Their guy” being Sheen’s character, Charlie Harper, who is rumored to be killed off and his funeral featured as the main storyline of the season premiere.

Of course, Sheen has his own big deal thing going on the same night as the Two and a Half Men season premiere: His roast on Comedy Central.

“And the same night at 10 p.m. the roast is on, it should be a big night,” he plugged. “I think it’s going to be epic, I got a taste of it on the road, I got roasted a few times out there.

“I think if anyone should be roasted in that manner, it should be me.”

Sheen will be setting his DVR for Men, though — he says he wouldn’t miss his own funeral for the world.

“Who is not going to watch?” he asked excitedly. “I’ll be there front and center, I’m just as curious as everybody else. It should be fun.”

Charlie Sheen is in Anger Management