Sinead O’Connor has always had a bald-is-beautiful stance. We’ve rarely seen the controversial singer with anything but a shaved head. Well, a brand new picture of her is making the rounds on the Internet. Check out the photo below.

Sinead O’Connor has always been a headline-grabber. In 1992, she ripped up a photo of Pope John Paul II on Saturday Night Live, something that crashed her career here in the States. 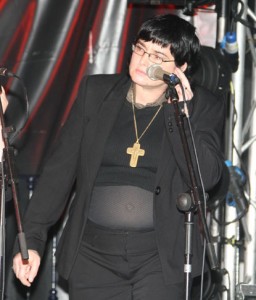 These days, the once-bald beauty is looking quite different. A new photo of from her current European tour hit People yesterday. Instead of her usual shaved head, she’s now sporting a short black, choppy bob. She’s almost unrecognizable.

O’Connor made her mark in the ’90s with the hit “Nothing Compares 2 U” and has spent many years campaigning for women’s rights while maintaining a musical career. She is currently on tour and her most recent album, Throw Down Your Arms was released in 2005.

What do you guys think of Sinead’s new look? Leave us your thoughts below.