Maroon 5’s Moves Like Jagger not only sounds hot, but it looks hot as well! Watch the just-released video featuring a shirtless Adam Levine, a rockin’ Christina Aguilera – and even Mick Jagger himself.

Moves Like Jagger is at the top of iTunes, and after the release of the rockin’ music video, it isn’t going anywhere! Directed by Jonas Akerlund, who has also worked with Lady Gaga and Britney Spears, this video has hot dance moves, hot people (ahem, Adam Levine) and the very hot icon Mick Jagger. 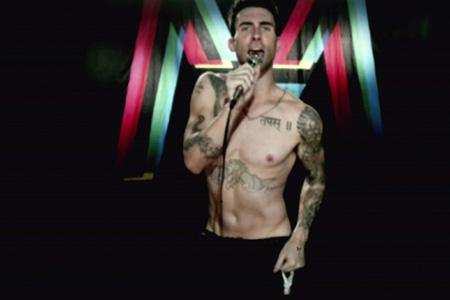 “It’s kind of a hodgepodge of many different ideas that we wanted to do, and Jonas Akerlund is at the helm of this whole thing, and he’s so talented and we love working with him, and this is going to be another great video,” Levine tells MTV.

“We were lucky enough to get Mick’s endorsement [for the video], as far as him giving us access to a bunch of different footage that’s so cool,” Levine says. “Not many people have seen [it], especially a newer generation of people that don’t know so much about how incredible he was.”

The video shows a shirtless and tattooed Levine, a diva-licious Christina Aguilera and plenty of hot models doing their best Jagger. Watch the video, bust out your own Jagger moves and just try not to sing along.