The London riots have shaken Kelly Osbourne. The singer, currently staying in her Los Angeles home, took to Twitter Monday night to check in on friends close to the unrest.

Fear over the unfolding London riots had Kelly Osbourne seeking out each and every one of her friends across the pond to assure they remain in good health. The drama and frustration of being thousands of miles away unfolded on Kelly Osbourne’s Twitter page on Monday. 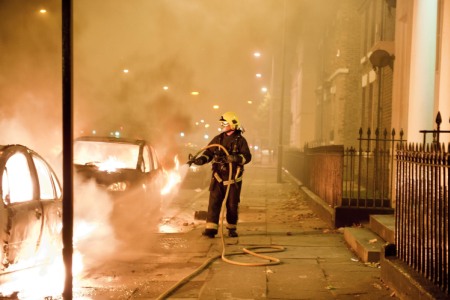 As the London riots came to a head Monday, Kelly Osbourne tweeted about her growing worry, writing, “I literally can’t leave my lap top busy making sure friends are safe and glued to the news.”

The 26-year-old went on to cause a bit of controversy by critiquing the police response to the riots, which were being organized through social networking sites. Kelly Osbourne wrote, “[With] the greatest of respect the police are not educated enough 2 deal with this kind of destruction so why dont they bring in the bloody army.”

Later attempting to clarify her comment she added, “just to make myself clear i DON’T MEAN THE POLICE ARE STUPID just that they have no been taught to deal with things on this level!”

It seems Kelly was able to get a hold of all of her London-based friends, who remain safe for the time being. “Spent the last 3 hours trying to get hold of all my friends in london finally the last one texted me back & is home safe. i need a nap!” Kelly Osbourne tweeted in relief Monday evening.