Kanye West managed to talk himself into another hole this weekend at a music festival in the UK. Which other celebs can’t seem to shut up?

Kanye West is riding high this week, thanks to the streaming release of Watch the Throne, his collaboration with fellow rap superstar Jay-Z. However, his shine was dulled a bit by some comments he made over the weekend. 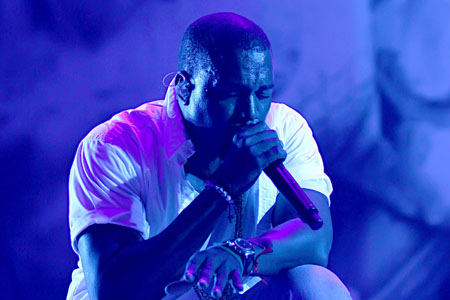 “I walk through the hotel and I walk down the street, and people look at me like I’m [expletive] insane, like I’m Hitler,” West said at a UK music festival.

“I only have half of my voice. I just want things to be right. This is the reason we started half an hour late.

“There is so much [expletive] going on in the music industry right now. Someone needs to make a difference. People treat me like Hitler,” he added.

Naturally, the comments didn’t go over too well with the audience — some even booed. He wasn’t fazed, though.

“One day the light will shine through and one day people will understand everything I ever did,” he added.

Okay, Kanye. You’re known for putting your foot in your mouth — VMAs and Taylor Swift, anyone? However, he’s not the only celebrity to put their foot in their mouths within the past few months.

Singer James Blunt angered some of his fans earlier this summer when he uploaded a picture to Facebook that featured him posing in front of a building known for its role in the Holocaust.

“Err… this is my hotel in Poland,” the You’re Beautiful singer wrote as a caption. Fans weren’t too pleased.

“Who the [expletive] do you think you are?” one P.O.’ed fan wrote, echoing the comments of hundreds of others.

Film critic Roger Ebert has recently evolved into a critic of, well, pretty much everything these days. He even saw fit to tweet a message blasting Jackass star Ryan Dunn right after his death in June.

“Friends don’t let jackasses drink and drive,” he wrote. The Web exploded after his comment, leading pal Bam Margera to tweet back in anger.

“I just lost my best friend, I have been crying hysterical for a full day and piece of [expletive] roger ebert has the gall to put in his 2 cents about a jackass drunk driving and [he is] one, [expletive] you!” he tweeted.

Ebert later apologized for his words.

30 Rock comedian Tracy Morgan made some pretty unfunny jokes earlier this summer at a gig in Nashville.

Morgan said his son, ” …better talk to me like a man and not in a gay voice or I’ll pull out a knife and stab that little [expletive] to death,” one audience member said of his “jokes.” He added that several audience members walked out afterward.

Too little, too late — especially since he made more jokes about physically disabled people a few weeks later.

“Don’t ever mess with women who have retarded kids,” Morgan said at a recent stand-up show in New York, according to a report in the New York Times. “Them young retarded males is strong. They’re strong like chimps.”

Where does Kanye West’s Hitler comparison rank among the sea of stupid celebrity comments?