It was the clash of the female pop icons, as Britney Spears brought her Femme Fatale tour to New Jersey’s Atlantic City and found one of the brightest music stars in the universe happily fist-pumping along. Mother Monster herself, Lady Gaga, made it a point to check out the competition on her home turf (she’s a New Yorker after all), and with drinks in both hands, danced her way through the evening. 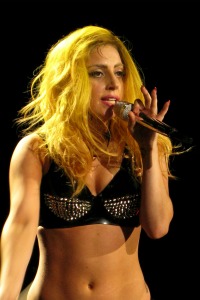 Since Britney Spears left the pop princess crown in disgrace several years ago, there have been several contenders for it, but no one who could rightly own it, until now.

Lady Gaga now wears the crown, but Britney wants it back. And she’s willing to shake her behind (literally) to get it, as evidenced by her enthusiastic show in Atlantic City.

Joe Jonas to get with Britney in Europe>>

During a break in her show, Brit told the crowd, “I have a very special guest tonight… Lady Gaga is here.” The crowd erupted into pandemonium, camera phones were directed everywhere, people screamed and then, a light shone on the woman of the shout-out herself, Lady Gaga, who smiled at Britney and waved at the crowd.

From her floor-section seat, the former Ms. Stefani Germanotta made a heart sign with her hands to Brit-Brit, and she, in turn, hearted right back. Guess the clash of the singing titans is over for now.

During Britney’s song, “I Wanna Go”, Gaga fist-pumped her appreciation, which was kind of difficult, considering she had two drinks in her hands most of the evening. Her fun was short-lived as the crowd needed to be near mother monster so bad that Gaga had to be escorted out of her seat.

Dressed demurely in a black leather outfit, with a cap, gloves and stockings, Gaga tried her best to fit into the crowd who clearly went from showing Britney all their love to showering it on the Lady.

Later, the Gaga hit the tables at the Borgata to try and win back the cost of her ticket, (we jest!)

That evening after the show, Britney tweeted her support of Gaga by saying, “So amazing to have the beautiful @LadyGaga at the show in AC tonight. Love you girl!”

This marks the second time Lady Gaga has been in the spotlight this week. Last week, it was rumored that the singing star was in talks to play the late Amy Winehouse in a biopic about the singer’s career. This would be Gaga’s first starring role in a film. She showed her comedic talents on Saturday Night Live last season, where she performed with host Justin Timberlake in several memorable skits.