The first installment of The Hunger Games trilogy has yet to hit theaters, but Lionsgate already has plans for the sequel. The follow up, Catching Fire, has been given a release date during the most wonderful time of the year! 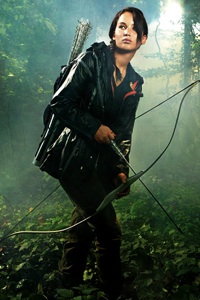 Catching Fire will set the 2013 holiday season ablaze when it debuts during Thanksgiving weekend. With most books-turned-film franchises (Harry Potter, Twilight), studios like the security of multi-picture deals and The Hunger Games is no exception. They have complete faith that fans will come out and support the films.

On the surface, Catching Fire might not seem like typical holiday fare, but according to The Hollywood Reporter, the folks over at Lionsgate think they’ve made the right scheduling decision.

“The magical thing about the Hunger Games trilogy is that the books have such a vastly broad appeal. The stories truly offer something for everyone, and the period around the Thanksgiving weekend is such an opportunity for families and friends to make an event of going to the movies,” Lionsgate co-COO and Motion Picture Group president Joe Drake said.

The first film is currently shooting with Jennifer Lawrence, Josh Hutcherson, Liam Hemsworth, Elizabeth Banks, and Lenny Kravitz (Is there anything he can’t do?)