Simon Cowell is opening up about the situation that caused Cheryl Cole to leave The X Factor— and he says the longtime friends are still on the outs. 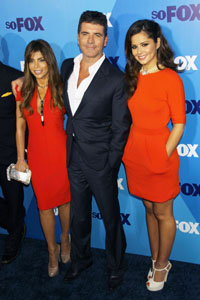 Simon Cowell and Cheryl Cole had been friends for years — until he had to fire her from the American version of The X Factor. Now, months later, the pair has yet to bury the hatchet.

Cowell is the producer of The X Factor and hired Cole to be a judge in the UK version. When he developed the American version, he opted to bring her onboard, but after just two American auditions she was yanked.

“After two cities, I offered her the job back in the UK, which initially she accepted. And then unfortunately when it went public the negotiations fell apart,” Cowell explained, adding that he believed Cole would be “more comfortable doing the UK show than the American show.”

When her return to the British version fell apart, Cowell claims he offered Cole a “chance to come back to America.”

“For certain reasons, [she] decided not to. And that’s why it ended up the way it is,” he said.

“I am sorry for the way it worked out as we were incredibly close. She is still grumpy with me.”

Cole was replaced by Nicole Scherzinger. The X Factor will make its American debut on Fox Sept. 21.