Kanye West is inviting more controversy — this time by comparing himself to the most evil man of the 20th century. 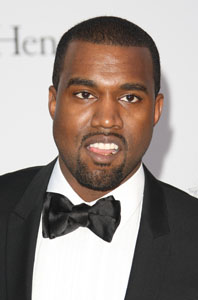 Kanye West threw another temper tantrum this weekend, telling concertgoers at a UK music festival that people treat him like Hitler.

The controversial performer was scheduled to perform at The Big Chill festival in Herefordshire, England Saturday, but tried to delay his appearance because, he said, his voice was hoarse.

When he finally took the stage he was greeted by a wall of boos from the crowd, then he yelled at a band member for playing the wrong song before storming off the stage — only to return ten minutes later with a typical Kanye rant.

“This is my most important gig of the summer — but I’m really frustrated,” he said.

“I only have half of my voice. I just want things to be right. This is the reason we started half an hour late.”

“There is so much [expletive] going on in the music industry right now. Someone needs to make a difference. People treat me like Hitler,” West whined.

“I walk through the hotel and I walk down the street, and people look at me like I’m [expletive] insane, like I’m Hitler.

“One day the light will shine through and one day people will understand everything I ever did,” he ranted.

Needless to say, Holocaust remembrance groups are not amused by West trivializing the murder of millions of people with such a trite comparison.

“Kanye West’s remarks at a recent concert in England, in which he claimed being so misunderstood people look at him as if he were Hitler, only suggests how little he understands,” said Mark Rothman, Executive Director of the Los Angeles Museum of the Holocaust. “He certainly misunderstands the supreme unattractiveness of his ‘poor me’ self-pitying martyrdom act. He misunderstands the vast gulf between his actions, no matter how wrong they may be or how wrong people may think they are, and those of the single biggest mass murderer in history.”

“And he misunderstands the great responsibility he holds in his hands together with his microphone,” concluded Rothman.

One thing Kanye West understands perfectly: How to get a rise out of people.

Is Jay-Z & Kanye West’s Watch the Throne ready to drop?