David Beckham delighted fans on Sunday with an adorable new photo of him and his new daughter, Harper Seven. 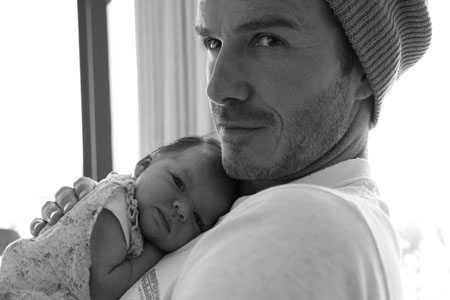 Beckham released the new photo on his Facebook fan page on Sunday. “Thought you’d like to see another picture of little Harper, I’m such a proud dad,” he wrote.

Victoria Beckham shared the same photo on Twitter, writing, “I took this beautiful picture and wanted to share it with you, baby Harper cuddling Daddy!”

Speaking of Posh, she’s been hiding out since the birth of little Harper. The only public spotting of the new mom has been in a photo the Beckhams posted immediately following Harper’s birth, and that was a close-up portrait of Victoria’s face looking lovingly at her new bundle of joy.

Don’t expect to see the former pop star until she has dropped all the baby weight — and sources say she expects to debut her slim post-baby body at New York Fashion Week in September.

“Victoria has locked herself away at her Malibu holiday home where she has imposed a strict food regime,” a source close to the couple told the Daily Mail.

“She has instructed her chef to do a no-carb, no-sugar diet of just green vegetables and low-fat proteins.”

That oughta do it!

read on for more victoria beckham

Victoria Beckham: I want Harper to be just like Kate Middleton

It’s a girl for Victoria Beckham