We’ve all seen the wonderful Jane Lynch in the trailer for Glee the 3D Concert Movie. Well, it turns out, that’s all we’ll see of her until the DVD is released!

Sue Sylvester is one of the most popular characters in the TV show Glee, but fans might be disappointed to know that Jane Lynch’s appearance in the trailer for the film is her only moment in the spotlight. 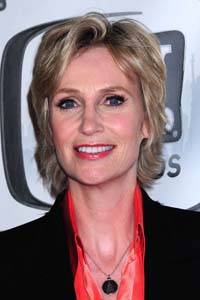 Lynch appeared during the Glee concert tour via video, and even appeared on stage at one stop, which was filmed specifically for the movie. But series co-creator Ryan Murphy told reporters at a news conference that Lynch will not be seen on the big screen.

She jokes in the trailer, “Please, save your money. This thing sucks.” Aw, Sue. We saw the film, and honestly, we miss your track suit. Murphy told USA Today, ”We’re doing another version in a couple of weeks on DVD. Jane will be on that. We’ll do it that way.”

Does this change your mind about seeing the Glee movie? Are you just excited to see the kids sing songs by Journey and Michael Jackson without harsh words from Sue? Let us know below!