Kate Gosselin says that not only is she ready to date again, but her kids are “begging” her to get married. In the latest episode of Kate Plus 8, we get a hint at what the mother of eight is looking for in a man; and a gluten-free diet is apparently a deal-breaker! 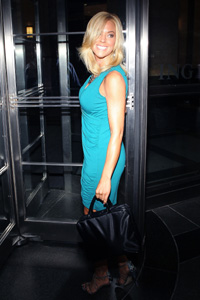 Kate Gosselin is back with her reality show Kate Plus 8 on TLC, and the busy mom made an appearance on the Today Show to talk about her new show and her new focus on dating.

“I’m definitely ready to start dating,” Gosselin told Ann Curry this morning, looking tanned and toned in a teal wrap dress. “There are a lot of obstacles for me. The odds of me bumping into someone are rare.”

Kate divorced Jon Gosselin in 2009, which did not come as a shock to many viewers who watched their marriage unravel on their reality show, Jon & Kate Plus 8.

“I have eight kids, I have a crazy work schedule, I’m known,” Gosselin reveals on the Today Show. “It’s sort of daunting when I think about the obstacles. I’m hoping that person is out there, because the kids on a daily basis are just begging me to get married again. They bring it up all the time.”

Gosselin says she has even considered enlisting her best friend for help, saying she told her to “go out and collect some people that would be suitable. “

In the most recent episode of Kate Plus 8, the single mom is on the prowl! Kate sees a guy with “awesome hair” and she tells her bodyguard Steve to chase him down. She then presents him with a cupcake, however he immediately asks her: “Is this a gluten-free cupcake?”

After that, she waves him good-bye.

The man has no idea who Kate Gosselin is, and told the cameras that he thought she was the owner of the cupcake shop. Oops!

Kate says she doesn’t mind the fact that he didn’t know who she was, but can’t date a guy with dietary restrictions.