Did rapper Lil Wayne almost die in a car accident? This is the latest celebrity death hoax to hit the Internet — and we help you separate fact from fiction.

Along with Hugh Hefner and Bill Cosby, Lil Wayne is the latest celebrity to fall victim to the celebrity death hoax – or, in his case, nearly fatal death hoax.

A Facebook scam was going around with a picture of Lil Wayne and the text: Lil Wayne Nearly Dies in FATAL Car Crash. The text below the headline reads: 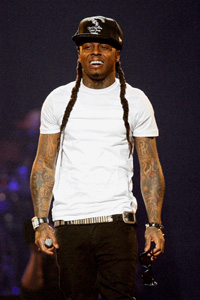 Fortunately, the rapper is alive and well, tweeting yesterday: “Just left Soul Ride sk8park. Awesome sesh! Props to little Adam Z jr and his homies for shreddin’ with me!! Bedtime.”

He also just performed at a concert in North Carolina with Rick Ross — Lil Wayne tweeting that the show was amazing.

This isn’t the first time Lil Wayne has been the victim of a celebrity death rumor. Three years ago a rumor surfaced that his daughter, who was eight at the time, died in a car accident — that, luckily, also turned out to be nothing but a rumor.