The plot thickens! The studio audience at a recent taping of Two and a Half Men got their first taste of Ashton Kutcher’s first scenes post-Charlie Sheen, but that’s not all. Photos of Charlie Sheen’s character’s funeral have been obtained. Read on for all the details.

Two and a Half Men’s highly anticipated fall premiere is still a ways off, but there’s still enough Charlie Sheen and Ashton Kutcher news to keep us entertained. 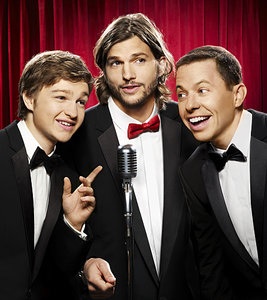 First, if you’ve been wondering what type of death Charlie Sheen’s character (Charlie Harper) might suffer when the season premiere hits, we can’t tell you the exact details, but we can show you the pictures.

TMZ got their hands on some pictures showing Charlie Harper’s funeral.

The best part about the photos? They included a staple piece of clothing from the character’s wardrobe — a bowling shirt. To see the pictures, click here and be prepared to be more enticed to watch the premiere of Two and a Half Men.

If the photos aren’t enough, we also have details on Ashton Kutcher’s first scenes in front of a studio audience.

According to TMZ, the studio audience on hand for Friday night’s (August 5) taping got to see some of the funeral scenes, but they were taped out of order to keep the exact cause of death a secret.

TMZ reported that according to sources at the taping, the audience did get to see funeral scenes with Jon Cryer, Angus T. Jones, Melanie Lynskey, and Jenny McCarthy, but again, his cause of death remained a secret.

There were mixed reviews on Ashton Kutcher’s performance, as some thought he fell flat and others felt he worked well with Jon Cryer.