Bethenny Frankel is celebrating the launch of Skinnygirl Sangria, yet in the back of this reality star’s mind is a biological clock that can’t be quieted down. 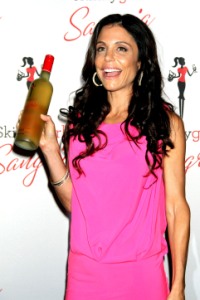 Bethenny Frankel sizzled in hot pink at Thursday’s launch of the Skinnygirl Sangria line at Gramercy Terrace in New York City. The mother of 15-month-old daughter Bryn has loads of plans for the future, and a second baby isn’t out of the picture.

“Sangria is that cocktail that women want to drink, but they get a headache the next day and they feel guilty about drinking it because of all that sugar,” Bethenny Frankel told Us Weekly of the launche of Skinnygirl’s latest product. “Women are wine drinkers — white wine drinkers — so it was a natural progression to go right into white wine next.”

On the topic of baby number two Bethenny Frankel tells In Touch, “Bryn is the most important thing. I manage to be with her every single day most of the day. I am certainly not a stay-at-home mom, but I cook all her meals and I’m with her all the time. So I managed to do it once. If I decided to do it again, that would be my top priority.”

Yet with Bethenny Frankel’s 41st birthday just around the corner the emerging booze mogul knowns time is precious.

“The clock is ticking,” Bethenny admits. “Women have said to me, ‘You’ll never regret having another one, but you may regret not having one,’ which is a lot of pressure. If I thought about it long enough, it would give me anxiety!”

Best wishes on both a second baby and the Skinnygirl line to Bethenny Frankel!