Judges Simon Cowell, Paula Abdul, L.A. Reid and Nicole Scherzinger, host Steve Jones and the execs came out to promote The X Factor and convince us it’s better than the competition, including, say American Idol. Amid the cutesy bickering, posturing and upstaging, Cowell revealed Mariah Carey will hopefully still be involved in the show.

Simon Cowell was his usual self when he spoke to the press via live satellite today at the TCA — in other words, he was confident as ever that his new import The X Factor will beat out all the competition this fall. 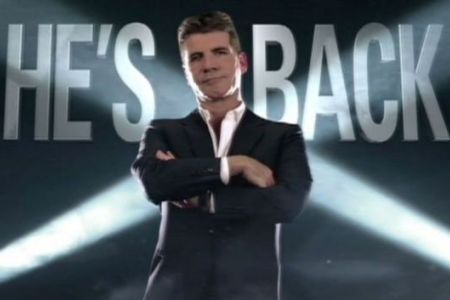 “It’s not just Idol, it’s any show,” Cowell clarified from his cushy seat at a secret location. “We don’t enter something for the silver medal. You do it because you want to be number one, and for the next few months we are going to throw everything at this to try and make it the best show on TV.

“I wouldn’t have made the show unless I thought it would be different,” he added. “We see this as a game changer… We will show the good bits, the bad bits, the ugly bits — and there are a lot of ugly bits.”

Cowell also revealed he plans to get new mom Mariah Carey into the mix. “There’s a section on the show I’m hoping Mariah will get involved in,” Cowell teased. “She’s been very enthusiastic about the show, then selfishly got pregnant, which is why she didn’t end up as a judge.”

After Cowell had enough time on his own, Paula Abdul, L.A. Reid, Nicole Scherzinger, Steve Jones and The X Factor execs took the stage at the tour to shoot one liners at Simon via satellite and promise a big new show. 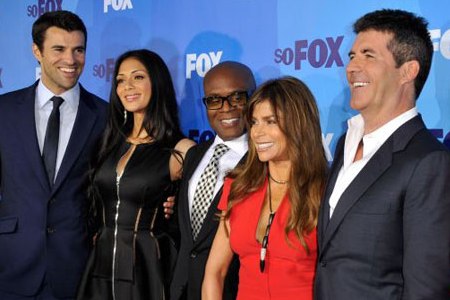 “It’s grand scale,” Abdul previewed. “It’s an epic feeling. I’ve never witnessed so much talent. In each of the four categories, there are stars — not just one winner — that will emerge. The next stage, with the mentoring, is going to be extremely intense.”

“Simon is a completely different species on the show,” she added. “He’s turning into me. He’s turned into a pussy cat. It’s very sweet.”

That didn’t seem to be the case, however. In fact, during the panel he got into it with Scherzinger, L.A. Reid and Abdul a few times, even pulling the ‘scratch your nose while flipping someone off’ move. Abdul also joked about being “back in a demented relationship” with him.

“It’s kind of like mommy and daddy had a trial separation and now they’re back together, and they still fight all the time,” quipped Jones.

As to the question about the pending lawsuit between American Idol creator Simon Fuller and Fox, executive producer Cecile Frot-Coutaz shrugged, “Lawsuits are the cost of doing business in this country, but we’re not at liberty to discuss it.”

Amid all the hype and pomp, Fox also revealed the schedule for the new season. While it looks like a lot of dates, the schedule also reflects how the show will break down as contestants go from anonymity to hanging out “at home” with the judges for mentoring.

The X Factor kicks off with two-night series premiere on Wednesday and Thursday, September 21 and 22 (8:00-10:00pm). These first episodes will showcase the live auditions of thousands around the country. The next week will cover the auditions from Chicago, Dallas, Los Angeles, Miami, Newark and Seattle, not to mention YouTube and the nationwide MyStudio audition booths.

Those who make the cut will head to Los Angeles for “Boot Camp,” which starts airing on Wednesday, October 5. The contestants will face the panel of judges and a live audience to show off their singing, dancing and overall performance skills.

The next cut is the final four categories. The remaining contenders will be broken up into Young Guys, Young Girls, Older Singers and Groups. The X Factor producers will then surprise the judges by revealing which category they will get to mentor.

The mentoring kicks off Wednesday, October 12, with the remaining contestants visiting the “Judges’ homes” (which could actually mean their business homes — why else would it be in quotes?) They’ll work with the judges to earn their chance at the live shows which kick off Thursday, October 13 and continue on a special Tuesday, October 18 episode.

Tuesday, October 25 is another special airdate. During the two-and-a-half hour episode, the judges will reveal who has earned one of the coveted spots among the season’s finalists. It will then be up to America and the judges to decide who moves forward to the live shows.

November is the month of 90-minute live performance shows on Wednesday, followed by results shows on Thursdays, which of course resembles the American Idol format.

The season finale will air in two parts on December 21 and 22, setting someone up for a very happy, Christmas holiday, respite with $5 million and a Superbowl commercial deal.