It was a 50th birthday befitting the President of the United States. President Barack Obama was ribbed in good fun by the first lady, serenaded by Jennifer Hudson and rallied for his 2012 campaign. He also joined his White House staff for some good old American burgers and fries. It was in all, a day to remember. 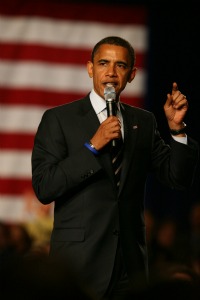 President Barack Obama turned fifty years young, but don’t use the word young around wife Michelle Obama. She took the day to jab some good-natured barbs at her husband’s age by way of a fundraising email that made fun of his grey hairs.

She said in the email, “Every day I see Barack make choices he knows will affect every American family. That’s no small task for anyone, and more proof that he’s earning every one of those last grey hairs.”

Michelle Obama then asked supporters to sign a birthday card for her husband. She continued, “Your names and notes will become part of a book that tells the story of this campaign, who’s building it, why we’re in this thing and what he means to us.”

Also on the President’s docket: A 2012 fundraising bash, which was aided by the appearance of Oscar-winning singing star Jennifer Hudson.

Looking gorgeous in a black dress, Ms. Hudson led 2,400 supporters in singing Happy Birthday to the leader of the United States at Chicago’s Aragon Entertainment Center. Also in attendance to pump up the crowd were Herbie Hancock and band OK Go.

Tickets for the fundraising dinner cost $35,800 a person. Additional contributions gained entry into the concert, with limited donors recieving premium seats. Those who added another $10,000 onto their tab were allowed to take a photograph with the President, as well as have their seating upgraded.

What they didn’t count on was the oppressive heatwave outside that kept the auditorium a stifling 92 degrees. Most supporters fanned themselves and tried to catch a cool breeze from the air conditioners that were working overtime to keep everyone comfortable.

Earlier in the day, Mr. Obama was in Washington with his staff, and took a stroll over to Good Stuff Eatery for a celebratory meal of burgers, fries and a shake. This meal was not only to celebrate his birthday, but to celebrate the hard work the staff had done over the past several weeks in working towards a debt settlement.

President Obama is so busy he rarely has time to enjoy the little things in life, so a burger and fries were definitely what the doctor ordered — that and some time to relax. Wonder if the President tuned into the premiere of Jersey Shore to unwind?

A smaller, more intimate gathering of family and friends was planned for the President in the White House Rose Garden.