Adam Lambert has declared he is happily in love, even though he can’t quite understand why everyone finds his sexuality to be so fascinating. 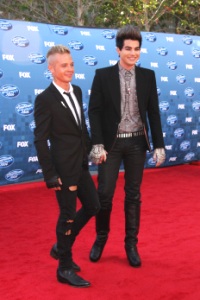 Adam Lambert is talking love, music and the hot topic of his sexuality on his upcoming VH1 Behind the Music episode. The 29-year-old made famous by being named runner-up during the eighth season of American Idol will get to say his piece this Sunday at 10 p.m.

“I’ve tried to keep that somewhat sacred, as far as that privacy,” Adam Lambert tells OK! Magazine. “It’s the one thing I have, you know? I think that’s not uncommon. A lot of people try to keep that private, but the good news is that I am in love, so that’s a good place to be. It’s a great time to be making music, I’ll tell you.”

Controversy & Behind the Music:

“I think a lot of the controversies that have surrounded my experience… I think part of the reason why they’re controversies is because I don’t always get to communicate my point of view or where I was coming from, and I think the special really allows me to do that.”

On his sexuality in the media:

“One of the things I find a little interesting is how much people want to focus on my sexuality. To this day, I guess, I’m starting to understand it more and more — that it’s just something that people find interesting.

“To me, it’s not something I think about actively. I struggled with my identity when I was a teenager, right before I came out. That was a very hard time to deal with that.

“I’ve had a couple moments in my career where there’s been some hiccups, but other than that I’ve had a pretty easy time with it. And it’s funny how much people sensationalize it, especially in the media. But that’s entertainment.”

Tune into VH1’s Behind the Music on Sunday for more on Adam Lambert!