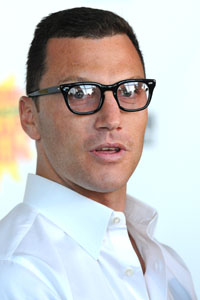 New York Rangers hockey star Sean Avery must have forgot that it’s baseball season, not hockey season. That’s the only excuse we can make for Avery’s hockey-eque abuse of an LAPD police officer Thursday night.

Cops showed up to Avery’s Hollywood home around 1 a.m. and took him into custody after a disturbance. The LAPD told People early Friday that he was still in jail awaiting release on $20,000 bail.

“He is in jail and still here — he will be bailing out shortly. He battered one of our officers,” a spokesperson for the LAPD Hollywood division said. He reportedly shoved one of the officers out of his house and slammed the door.

“He didn’t want to turn down the music at his home,” the rep said. No need to get violent, Sean!

Avery is a polarizing figure in hockey: fans love him, but other players hate him. He was suspended by the NHL in 2008 for making lewd statements about a rival player’s girlfriend (and Avery’s ex) Elisha Cuthbert. He also gave Devils goalie Martin Brodeur a concussion during the 2008 playoffs series.

He does have a nicer side: He lobbied the New York government earlier this year — along with several other celebrities — to allow same-sex marriage in the state.

Now, he’s facing a serious charge that could result in jail time. He’s due in court to face the charges on Sept. 2.

Do you think Sean Avery should go to jail for pushing an officer?